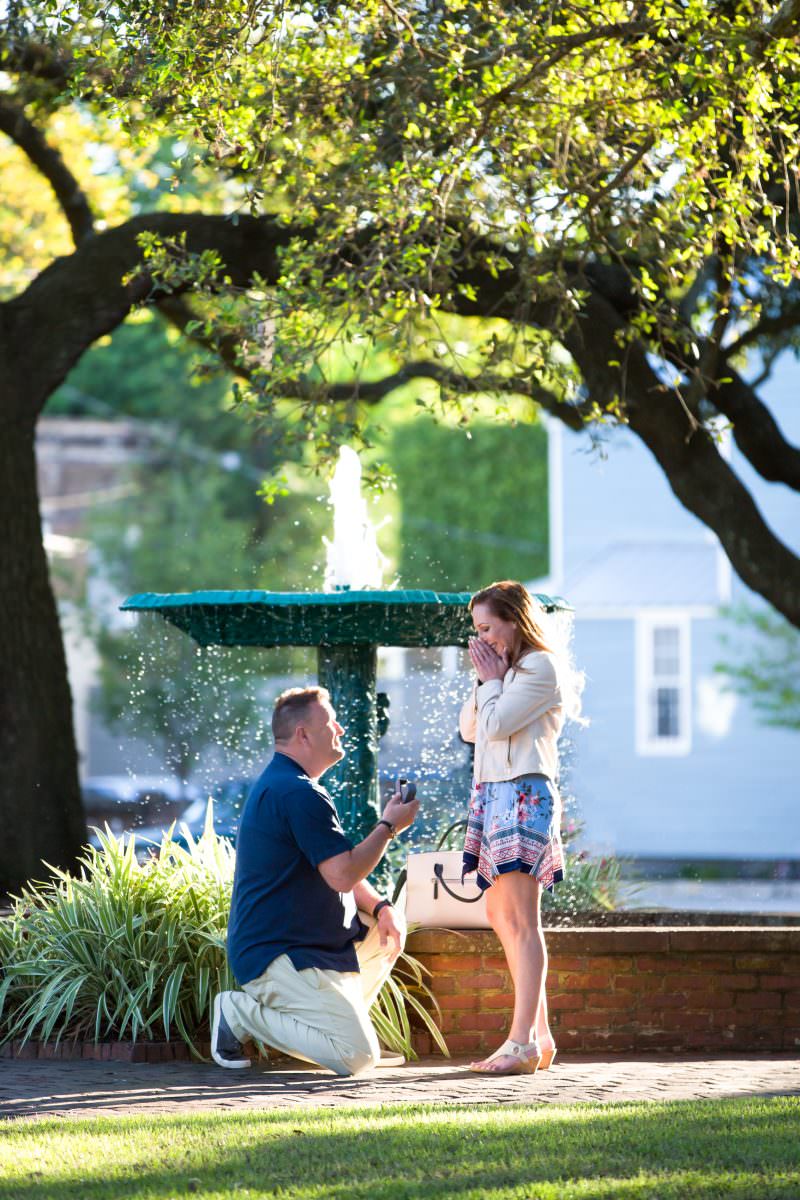 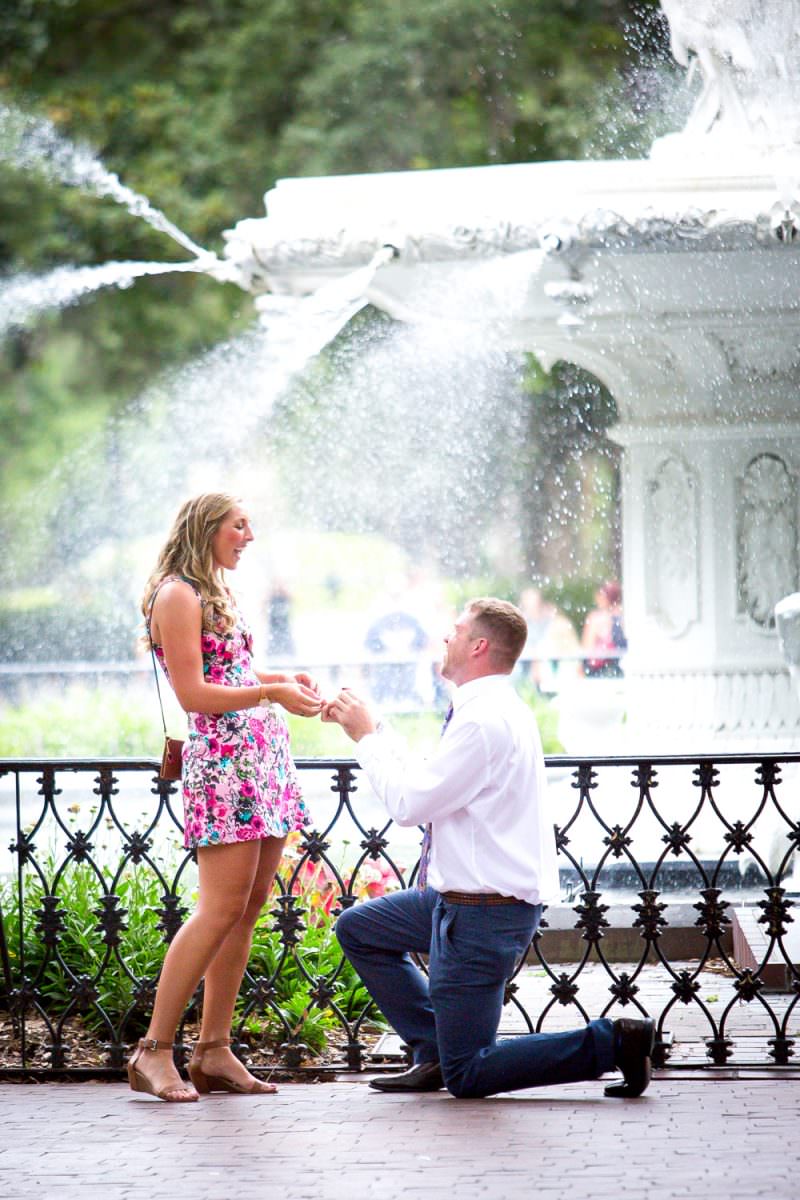 It has been a busy year for capturing romantic proposals in Savannah and I absolutely love being a part of surprise proposals!

I am honored when I am contacted in advance to schedule a surprise proposal session because they are so sweet and romantic.

Over the past few years I have photographed over 100 Savannah proposals!

If you are planning a surprise proposal I would love to hear from you! You can find pricing and info HERE .

Christina was visiting Savannah on a girl’s weekend and had no idea that Austin had secretly arrived in Savannah to pop the question! She thought her friend was taking her to the square to take pictures, and as she walked towards the fountain she spotted Austin. 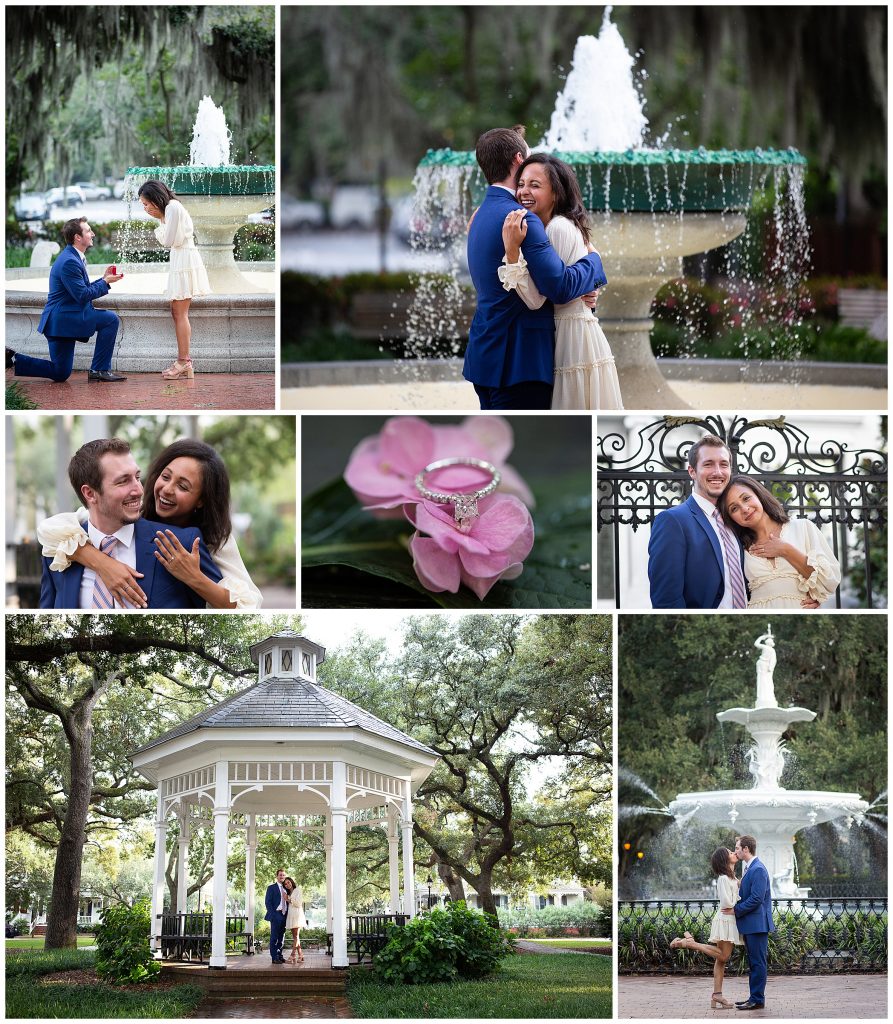 Adam arranged for a romantic carriage ride  to Historic Forsyth Park where he popped the question in front of the amazing fountain! We got lucky and the rain that was forecasted never happened. Congrats to these two lovebirds! 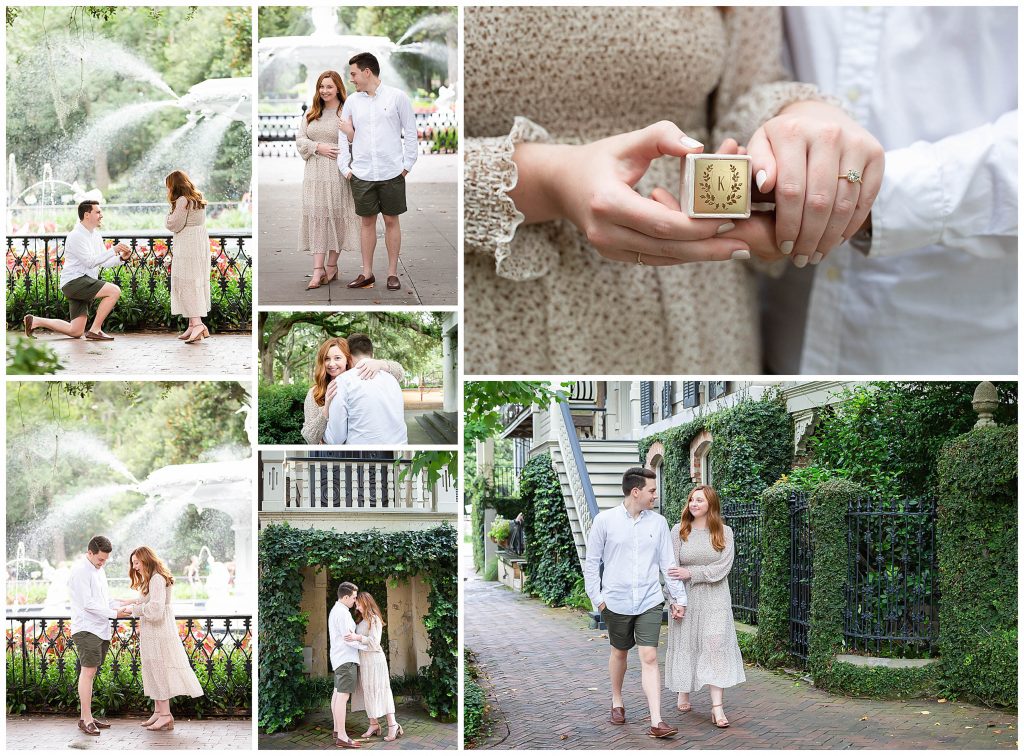 Matt popped the question to Olivia in the gorgeous gazebo in Whitefield Square.

I was really impressed that he thought to have Kato Floral Designs decorate the gazebo with beautiful florals beforehand! Afterwards we went to Forsyth Park for a few more sweet portraits! 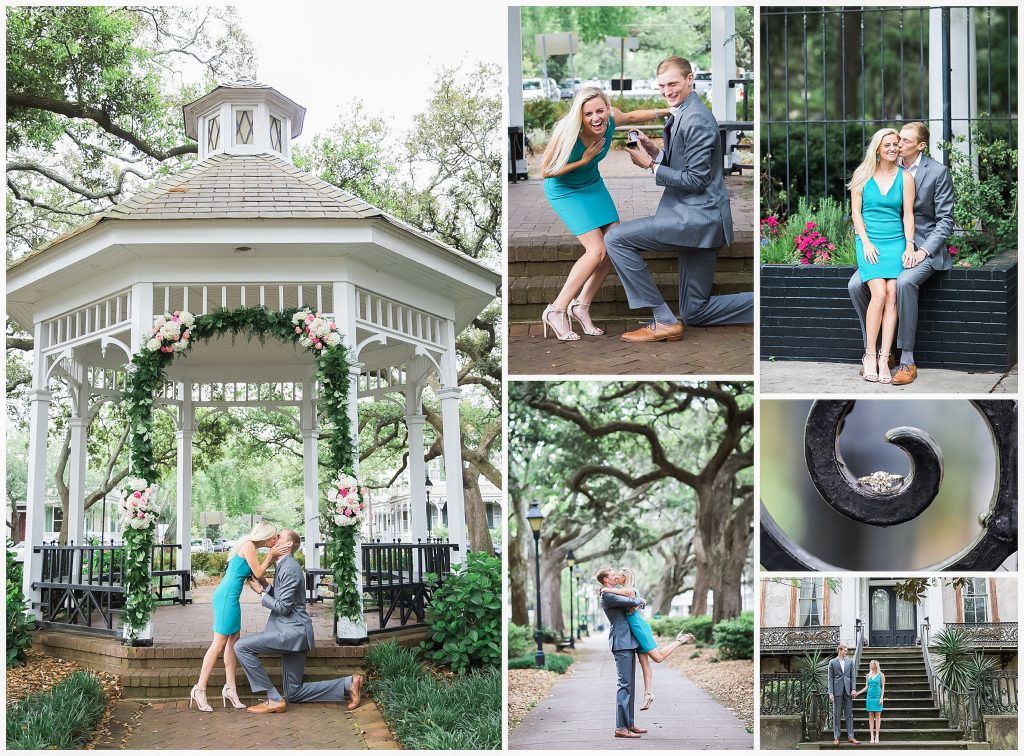 Dillon proposed to Kristina in Monterey Square. Monterey Square is one block over from Forsyth Park and another gorgeous option! It is a little less traveled than Forsyth and perfect if you are looking for a more private spot. 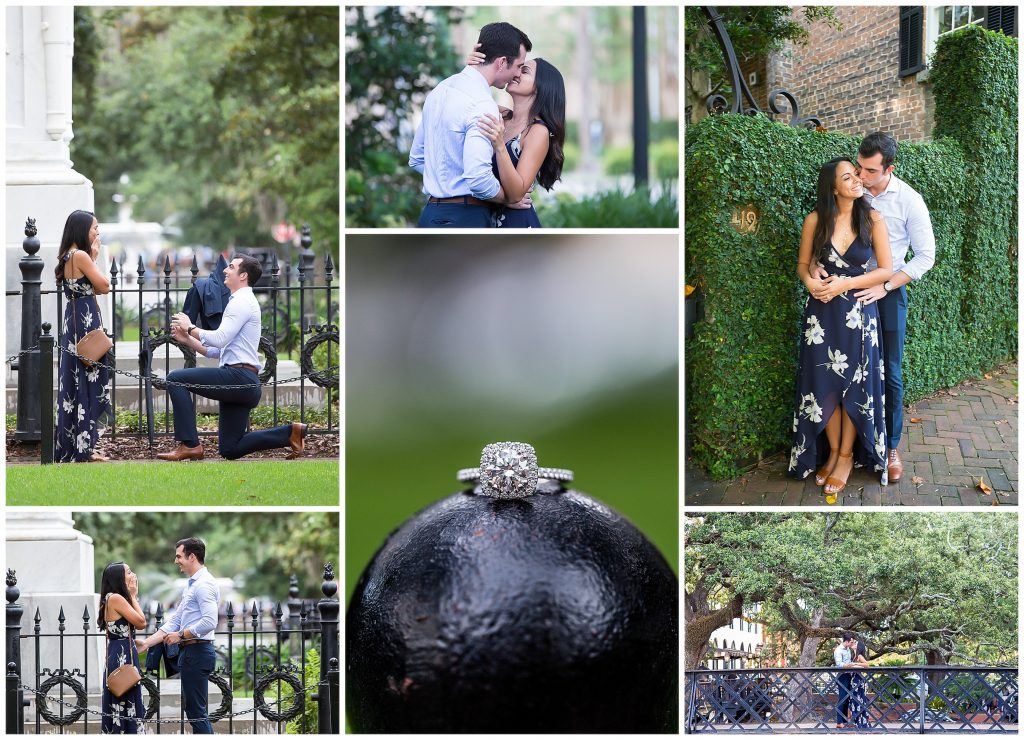 Brian and Ingrid traveled from Canada to visit our beautiful city where Brian chose to pop the question! The plan was to stop in Lafayette Square on their way to brunch where he would surprise her with a ring at the fountain…it went off without a hitch and Ingrid had no idea this was going to happen! They were too cute together! 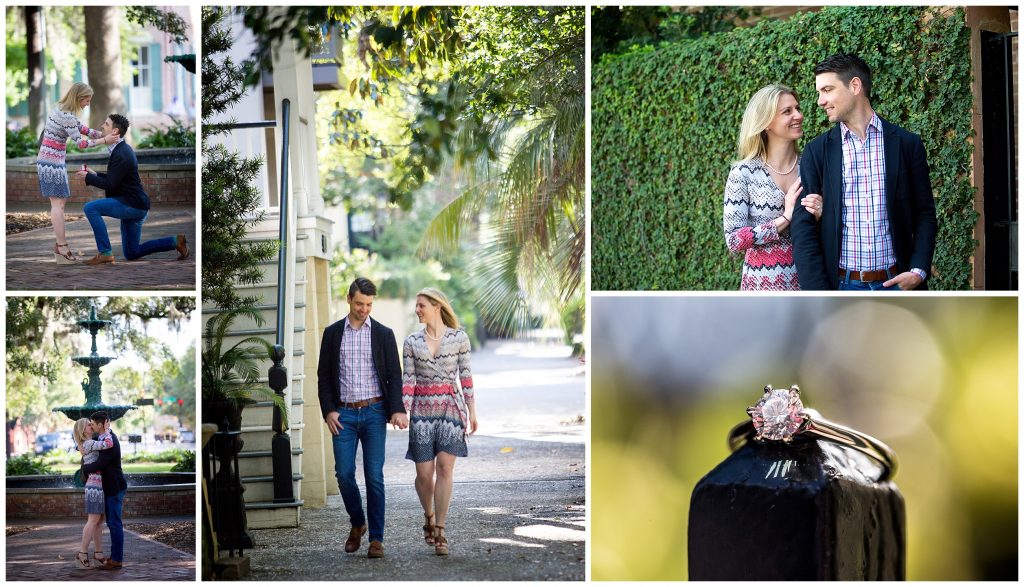 Mike popped the question to Alee in the gorgeous gazebo in Whitefield Square.

They were so cute together as we wandered around the square then down to the Cathedral for more shots. 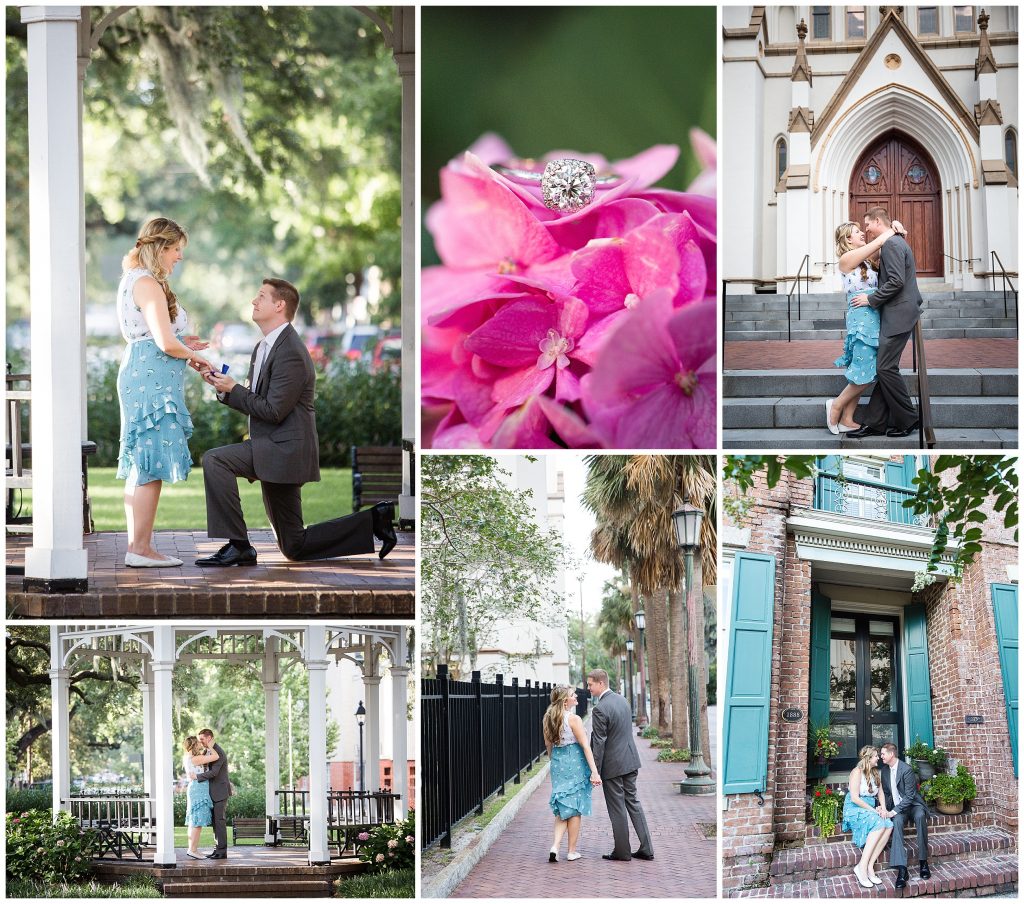 Justin and Bailee were also engaged in Historic Forsyth Park. They took a romantic stroll through the Savannah Squares and ended at the fountain in Forsyth Park where Justin asked Bailee for her hand in marriage!

They were absolutely adorable and she was totally surprised! 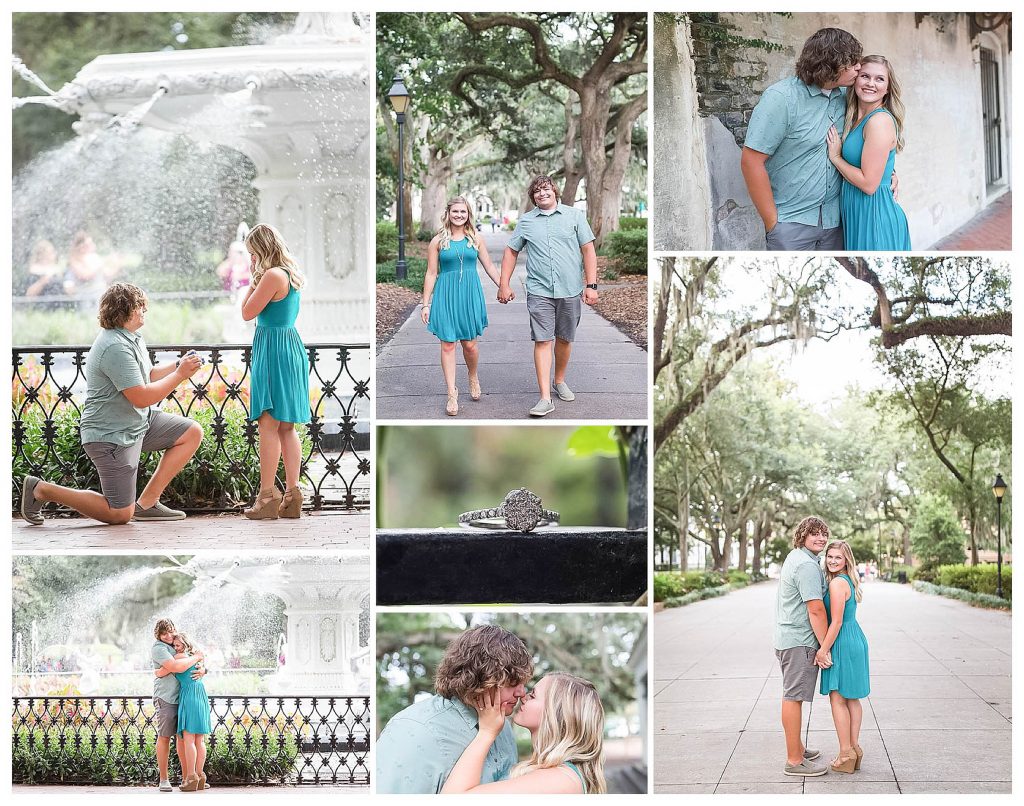 Spike took Lindsay on a historic carriage tour that ended in Columbia Square. They walked up to the fountain and he dropped to one knee and popped the question. Lindsay was completely caught off guard and her reaction was super cute! Afterwards we wandered around the area for more photos. 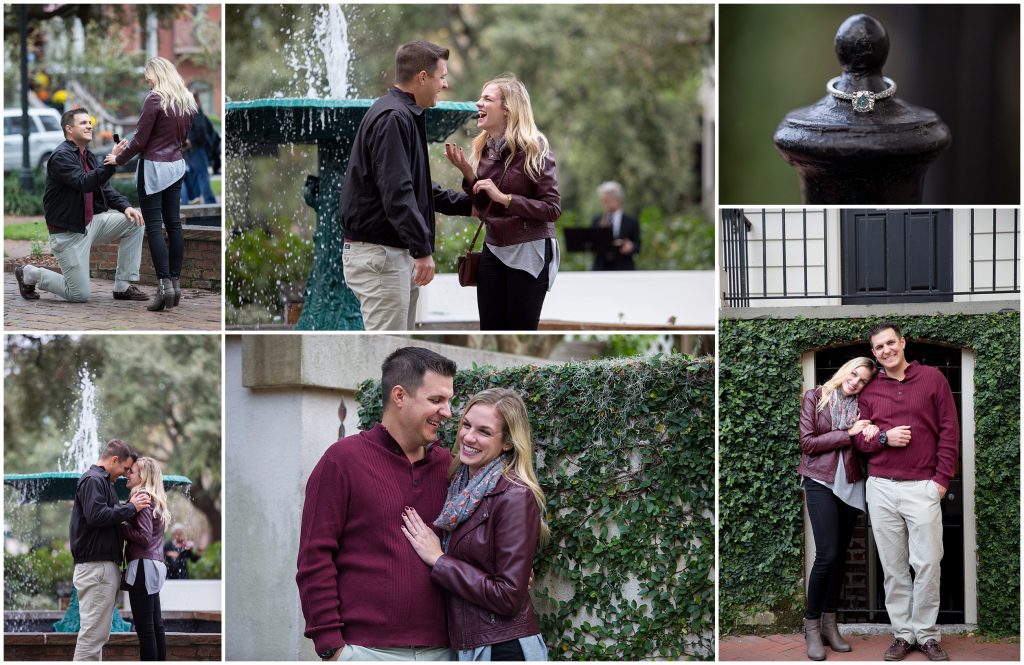 Kyle had told both families that he was going to propose to Emily on the lovely grounds of Bethesda Academy. Members from both families were actually hiding behind a building watching the entire thing. Emily was so shocked after she said ” I Do” to see all of the family make themselves known. So great! 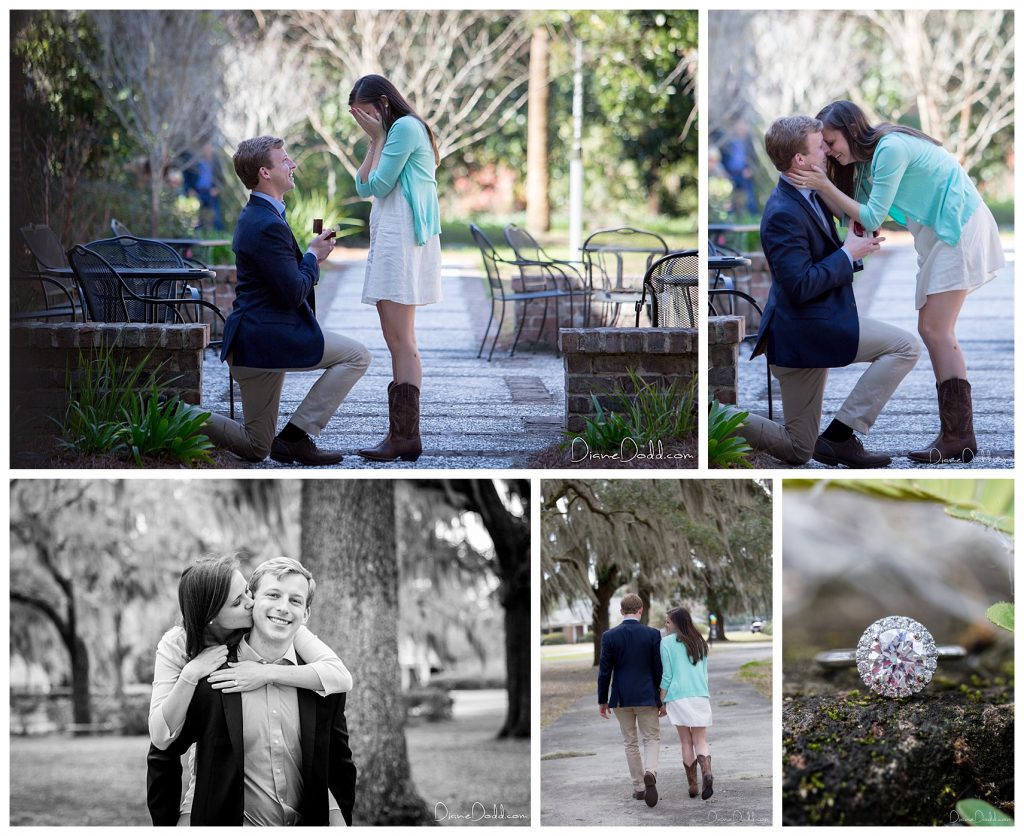 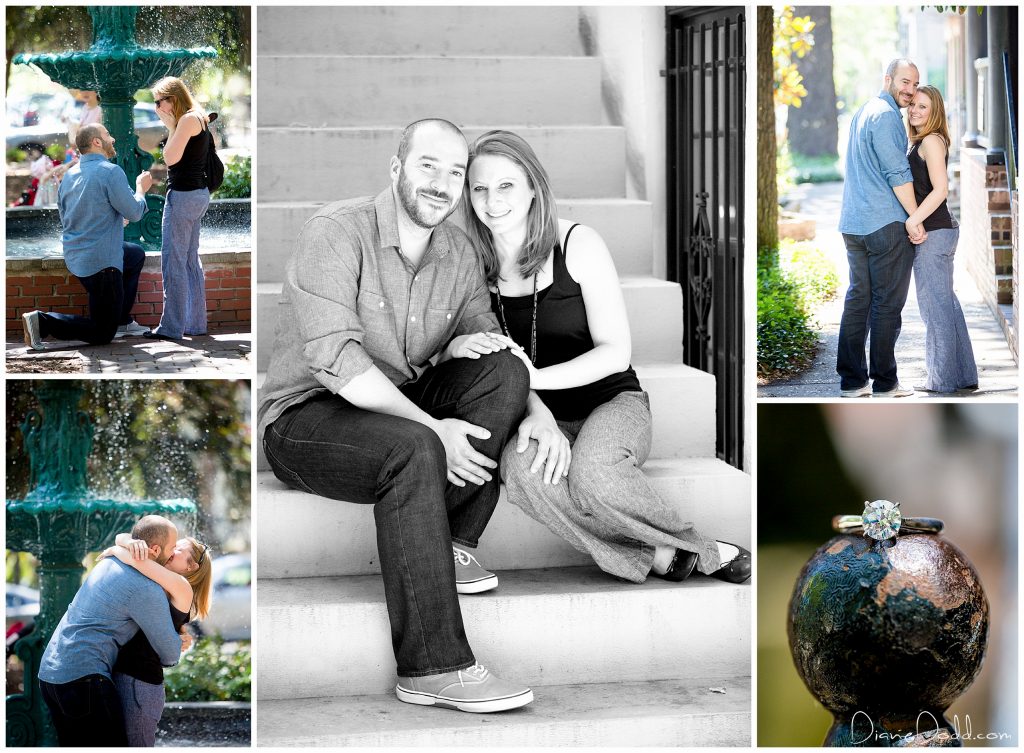 Another lovely proposal in front of the famous Forsyth Park Fountain. The fountain is just such an amazing backdrop! 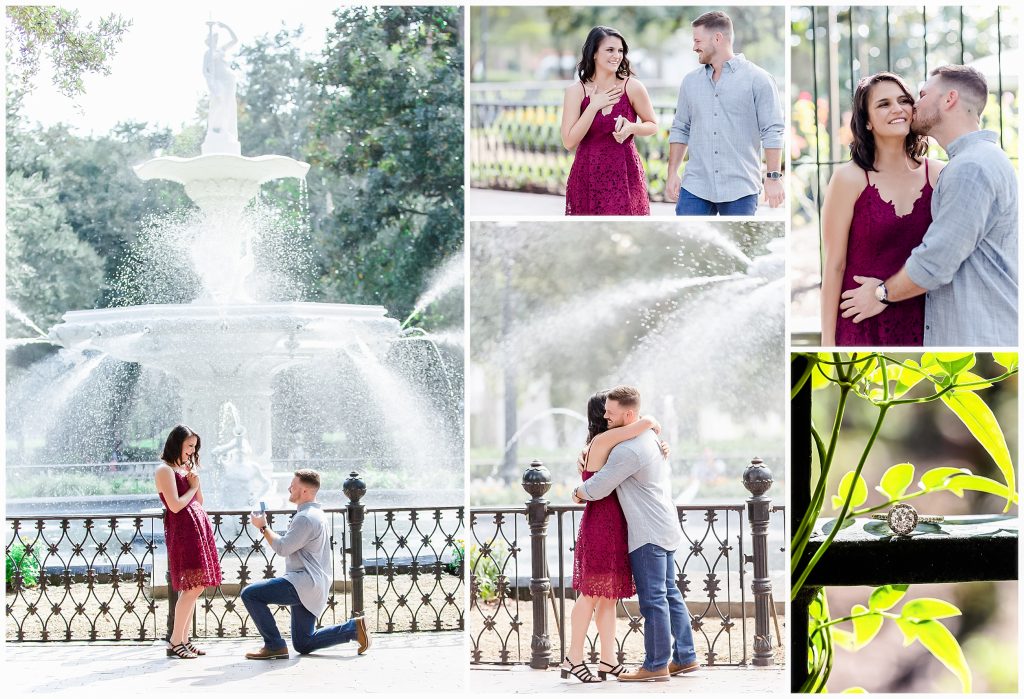 Charles and Cherie were engaged in Forsyth Park in January on the coldest day of the year. It was so cold that day that parts of the fountain had actually frozen into icicles! Despite the chill in the air the proposal went off without a hitch and was just beautiful. You can see some cool photos of the frozen fountain HERE. 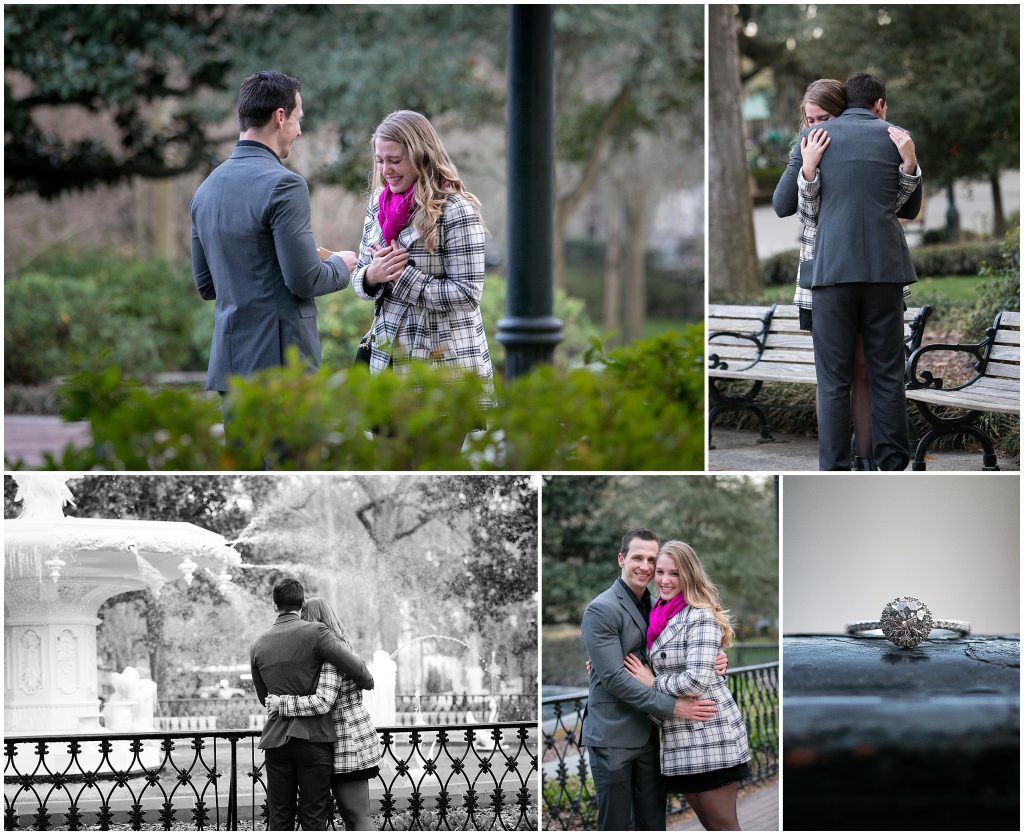 Another sweet Forsyth Park winter proposal was Sydney and Andrew. The path we had planned for Andrew to walk on to the fountain had been roped off for a wedding, luckily I had time to maneuver over to the other side of the fountain without being noticed at all. PHEW! It all worked out and they were absolutely adorable. You can see more of their photos HERE: 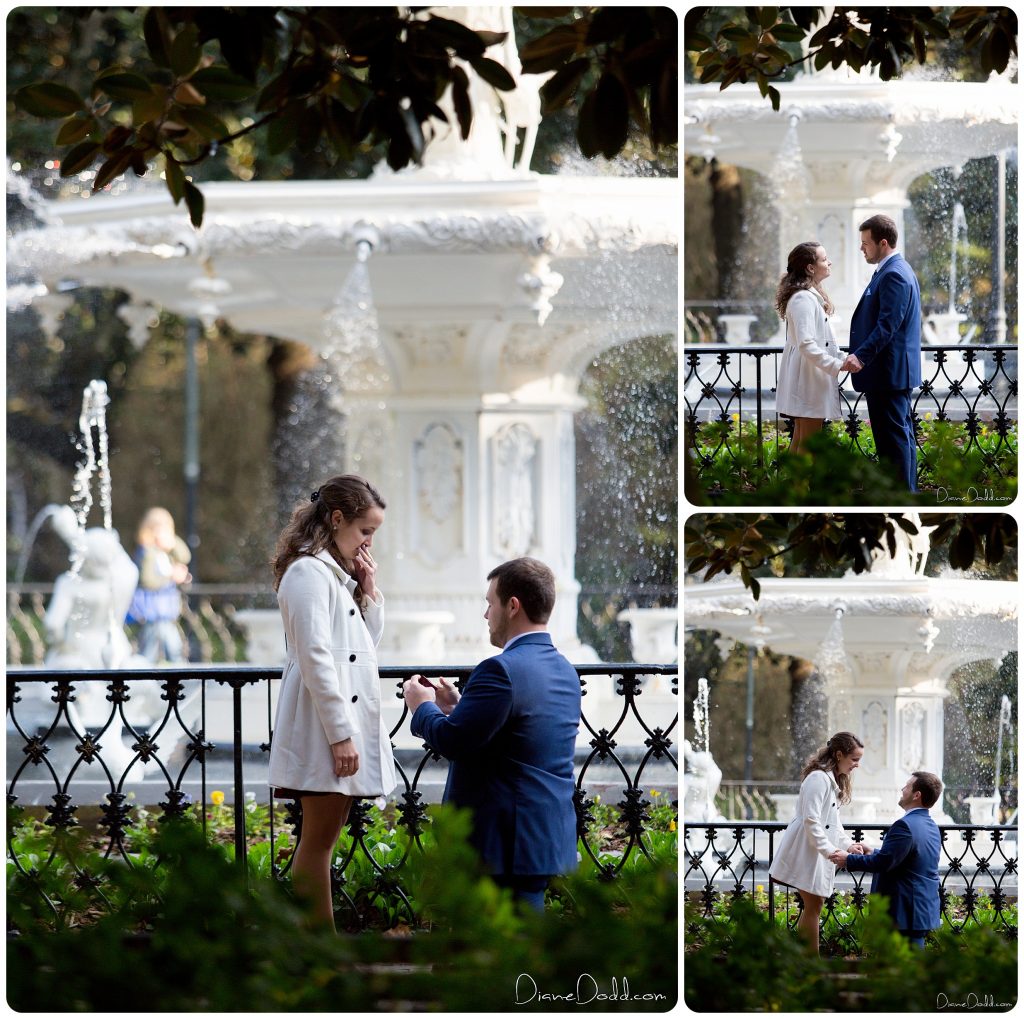 Matt spent most of the day making sure everything was just right and that the ring was perfectly hidden on a sunflower before he proposed to Ashlynn on his family farm. It was such a pretty spot for a proposal! Definitely one of my favorites. 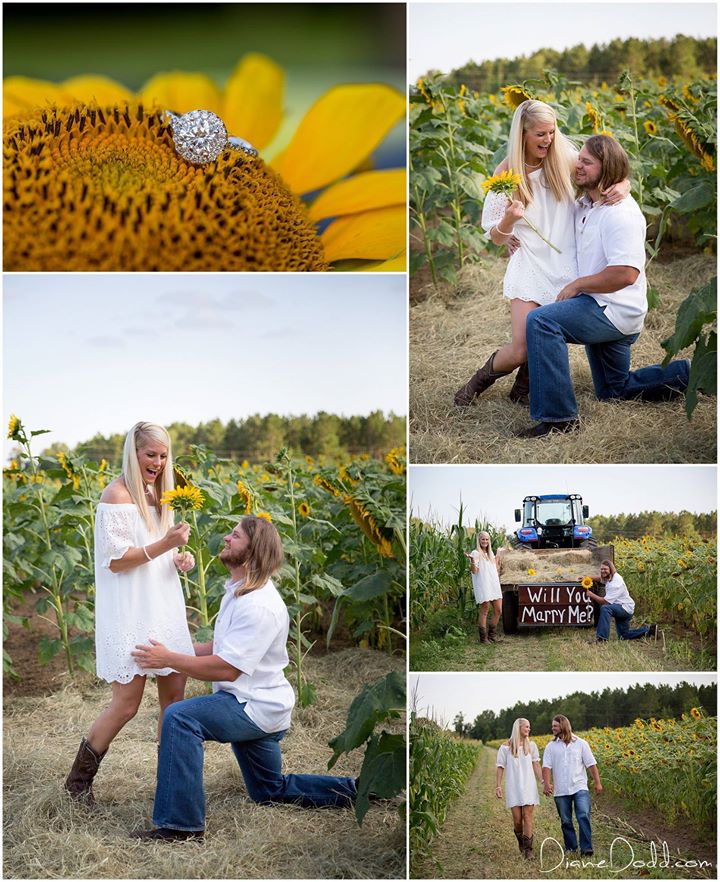 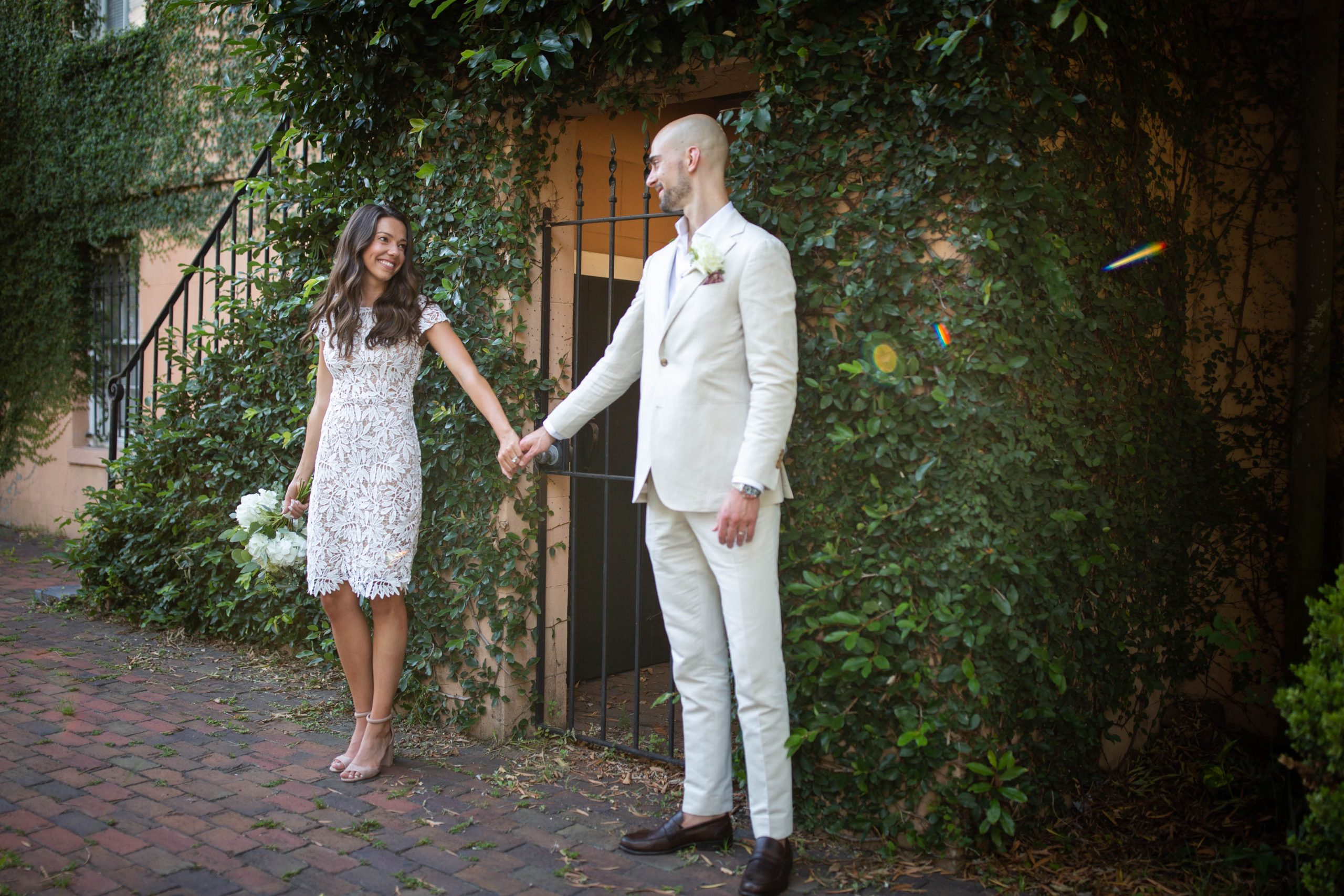 Thank you! I love shooting proposals 🙂

Love all these! What amazing moments to capture!